WInterrail into the 20s, each stop posted on the same day...3 months later

For my last night, I had found a good deal on one of the hotel apps. And yes, it was a nice experience to be in this beautiful hotel, opened in 1899, with comfortable beds. And with some complementary things in the room that I haven't seen in other hotels, like the dressing grown, the special drawer for the red wine and its glass... Also, there was a very cool... let's say... industrial designed view from the window that came with the good deal price...

The sweetest signs of "Please do not disturb" & "Please clean my room", (alluding to the the fact that Lund is a university town) that I have ever seen!

I certainly wanted to see the cathedral and finding out that there is an astronomical clock, I stayed around to see it play. The strokes in the beginning comes from the two knights on the top, one representing the day and the other one, the night. The playing doesn't continue until just after 0:50 so just skip the long pause in between.
There are a lot of small streets with pretty and idyllic houses as well as magnificent buildings like the cathedral and university buildings. Also, there are beautiful old buildings reminding of ancient times. like the Liberiet from the 15:th century, just beside the cathedral.

Sometimes I decide upon a road and then take another. Just because it seems more interesting, like when I happened to arrive at the botanical garden where there was a lot of floral beauty.

There were actually some plant life in the walls of the cathedral as well, just like a meeting between heaven and earth...

By five in the afternoon, I was on the last train on my Swedish interrail trip, at least for this time. I do hope SJ decides on continuing this great possibility of interrailing through Sweden!
One thing I really liked was how easy it was to book as it was just to open the SJ application, choose "tickets" to find the interrail card. When clicking on the booking button in the card one came into what locked like the regular booking mode, just that the available tickets cost 0 SEK. As previously mentioned, the couchette tickets could also be booked with no extra charge.
What a fantastic way to see our beautiful country!

After having left Falun so quickly I was about to return after my visit to Halden. It seemed however to take me more time to get there than to be there.  Finding it more time effective to go further south, I opted for Helsingborg and Lund as a final of my trip.
Helsingborg has for me just been a "passing by town" on interrail trips in my twenties, looking out the window when the train got onto the ferry and the adventure could start for real... After all the years, it was very nice to now explore this city more than just from the train window.
The first sight of the day was Kärnan, a royal tower that once served as a home, guard, and defence within a stronghold.

A 20 minutes walk brought me to Fredriksdal's open museum with an ancient Helsingborg town quarter, country houses and a manor. It was the owner, Gisela Trapp, that, according to the will of her late and beloved husband, gave the manor to the town of Helsingborg in 1918, with the purpose of being used as an open air museum. New buildings have been added throughout the years.

Before leaving Helsingborg for Lund I had a cappuccino at the town's own coffee company, founded in 1886.The text in the first photo is the announcement of the coffee shop to open the following day...

Halden seems nice! I want to go to there!
Sitting in my sofa, looking for where I wanted to go, norvegian Halden seemed like an unknown place, something new to explore. Maybe it was just too long ago since I was in school and in history lessons. Because as a matter of fact, it was in Halden were the swedish king Karl XII died, close to the Fredrikssten fortress which the Swedes were trying to take.

It was actually the fortress that attracted me, guarding the town from its height. And why not going on the singsong at Grensen? I finally decided not to go on the sing along evening. Visiting the fortress the day of the event, permitted me however to hear some of the preparations...
I surely had my dose of vicarious fear of heights that day. Often there were no protective fences and seeing a couple close to the edge, I just couldn't bear the sight and had to turn away. No need at all to fear for my own sake as my safe distance had a most comfortable margin... (beware of windy noice)

Pictures from inside the fortress

Then finally also some pictures from a walk through the town that I took on the afternoon of my arrival, and among others, the nice pigeon apartment building.

29 July - A night in Gothenburg

The day had been sunny and very hot. Leaving Skövde and Varnhem behind, continuing south, I was as satisfied as tired after a very interesting day.

Just across the street from Gothenburg central station, at the market place, is the Clarion post hotel. A year ago, after a conference, the hotel had caught my eyes and made me curious. Now was the perfect occasion to experience this former post office! The room I got, in the 12:th floor, offered a magnificent view

From dusk to night

The evening was still warm at 10 pm, one of those marvellous summer evenings, like made for sitting on a terrace, watching people and letting the time pass by, while having peanuts and, in this glass, a delicious alcohol free drink.

The following morning I went for a swim in the pool on the top floor. To call it a swim is an exaggeration since I rather spent my time enjoying Gothenburg from above (forgot however to return for a photo).

One a clock was the departure time for the train of my next destination...

There was actually a particular reason for my choice of Skövde.
In the beginning of the 21:st century, a fever caught Sweden. It was the Arn fever. There was a new outbreak some eight years later when the film came,  based on the books about the medieval fictional person Arn.
Single cases of fever still occur. I got it myself since I read the serie this winter. And voilà - my ultimate goal was to visit the church and cloister ruin with its herb garden in Varnhem, not far from Skövde.

Close to the church is the Kata farm. It's  a house that has been built over what might be the oldest room in Sweden.  It gives an exposition about the Christian Vikings that once lived in Varnhem. Kata and her family were wealthy and lived  in the 11:th century.

I was fortunate enough to come just in time for the guiding of the church and joined as well the one about Kata farm. Both guides were much initiated and their own interest in the subject was apparent and contagious. Two booklets and some brochures added some extra weight to my backpack after my visit. 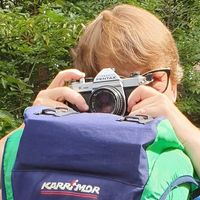