This little story is about a time when I came to the ocean and found one  seagull baby dead. I felt so sad. I had been there 4 days earlier and at that time the young Seagull was full of life, even if I could see that some of the other chased him/her away. I thought that maybe the dead Seagull had it better in the ocean, instead of laying on the ground among the other, so I made a decision, which might have been  a wrong decision. I took the Seagull by the feet and carefully carried him/her to the ocean. All of the Seagulls at the beach was lifting to the air, circling high up and sqweeking. In a big circle they flew and then it became totally quiet. I didn't know if I should put the Seagull back but decided that he/she was better in the ocean. So I put him/her out, cried a little and he peacefully float away on the waves out to the horizon. All Seagulls flew away, and it took 15 minutes before one of them came back. It felt that I had interfered when I shouldn't.  I was glad that I had taken photographs of just that Seagull 4 days earlier, but I felt very sad about his dead. 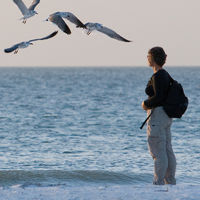