The Blues is not music it’s a way of life John Lee Hooker is one of the superstars of blues and he is known as the King of Boogie and the King of Cool. His simple but effective songs has made a huge impact on modern music and artist like The Rolling Stones and the Yardbirds introduced his songs to a new and bigger audience.

John Lee Hooker was a blues singer from Mississippi in USA. He moved to Detroit in 1943 when he started to work on a factory. In  his spare time John Lee visited the Apex Bar on Hasting Street which was the heart of the towns black entertainment district. He bought a electric guitar and started to play in the clubs. He quickly rose to fame and started to put out records in the late 40s. His first single Boogie Chillen was a instant hit. With it’s driving rhythm the song is considered to be a forerunner of rock’n roll music. Michael "Cub" Koda the author of the books All Music Guide To Blues and Blues for Dummies said that the riff in John Lee’s debut single "Boogie Chillen" launched a million songs.

- In my career, people in the record business have been rockin' in the same ol' boat. They all crooks - I'll say it clear and loud - especially the big ones. - John Lee Hooker

Like so many other Afro-American musicians John Lee Hooker earned little money from the record sale and had to play in pubs and shacks in order to get some extra money to pay his bills. John Lee had his own style and he only knew maybe two or three cords. It was hard to work with John Lee cause he rarely played with a standard beat and often changed tempo in the songs. Therefore he often worked alone.

In 1958 John Lee met the 12 year old guitar player Leroy Emmanuel who didn’t have a problem with his style of playing and knew how to follow. Leroy was just a kid but he could play and he was happy just to play with anybody. Leroy played with John Lee in various clubs and shacks in Detroit over a 10 year period. But he never did any recordings with him. – John Lee Hooker was known but he wasn’t big. We were playing at a place called Blues Unlimited on the Eastside of Detroit. It was only a little shack. We sat there in a corner playing the blues in the dusty little place. John Lee was singing and doing his guitar thing he looked at me and I did all the solo stuff. – Leroy Emmanuel.

Although his record sale was good John Lee still had to struggle to survive. He reached a new audience in 1962 when he made his first ever tour to Europe and he had a huge impact on the blues scene in England. By the end of the decade John Lee played at festivals and rock clubs in Europe. Although he made records and sold many tickets he hardly had enough money to pay his bills.

John Lee Hooker made a album with Canned Heat in 1971 and it was the first of his albums that charted. In the late 70s and 80s John Lee toured Europe and the USA steadily. In 1989 recorded John Lee the Healer with Boonie Rait, Carlos Santana, Canned Heat among others. The Healer and the albums that followed was huge successes and it permitted John Lee Hooker to live the rest of his life in comfort.

Blues was not only music for John Lee Hooker it was a way of life. John Lee died in his sleep on June 21, 2001 in his home in California at a age of 83 years. But the blues wasn't buried with John Lee. It's still alive and many musicians carries on the blues torch. One of them is Leroy Emmanuel. He has played the blues for 60 years and continues to make records and tour the world.

An Interview With a Guitar Legend Leroy Emmanuel started his professional career when he was 12 when he played a gig with Sonny Boy Williamson. Since then he has played with some of the greatest entertainers in the history of modern music. Most people have heard Leroys guitar play and his backing vocals. But not so many know who he is or have heard his story. I want to tell Leroys story and I did a long interview with him this summer. A interview that will hopefully be published later this year. 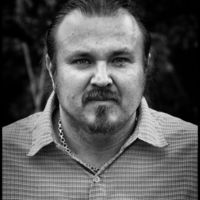